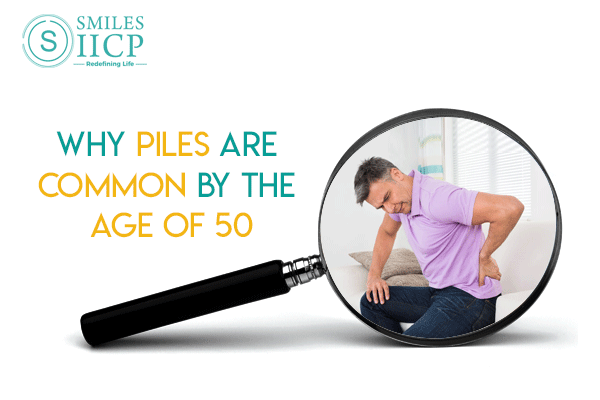 Anyone can get hemorrhoids or piles but, they become more common as people age and it is estimated that 50% of people have them by the time they are 50 years old.

Although anyone can get hemorrhoids, they become more common as people age and it is estimated that 50% of people have them by the time they are 50 years old. Women often develop piles in pregnancy or during labour.

What causes Hemorrhoids among many aged 50?

“The primary cause of hemorrhoids is constipation which itself becomes more common as people age. Difficulty in expelling stool becomes more difficult with age and it can cause people to strain in order to expel stool. Such strain puts pressure on the veins in the rectal area causing such veins to enlarge. However hereditary factors can also lead to hemorrhoids and people who are obese are more likely than others to get hemorrhoids. Diseases of the liver can also lead to hemorrhoids,” explains Dr Parameshwar CM, Chief, SMILES – Bengaluru Smiles.

Hemorrhoids can be internal or external and show up in different guises. Internal hemorrhoids are usually painless unless they protrude outside the anus in which case they can cause blood clots which can be painful but are nevertheless harmless.

A few symptoms of hemorrhoids are

Two additional symptoms of Hemorrhoids are

How to prevent hemorrhoids if you are 50 or above

The easiest way to prevent hemorrhoids is by eating healthy and getting plenty of exercise. Someone who already has hemorrhoids can make lifestyle changes that make hemorrhoids less bothersome. As constipation is one of the leading causes of hemorrhoids among those over 50, someone who is suffering from hemorrhoids may want to ask a physician whether a medication they use is making them constipated. When this is the case a patient may ask a doctor to prescribe another medication that does not cause constipation.

Constipation can often be alleviated by eating a diet that is rich in the fiber found in whole grain foods, fresh fruits, and vegetables. Drinking up to or more than 6 glasses of water every day may also help alleviate the symptoms of hemorrhoids or prevent its onset altogether. A diet that is rich in fiber and which is complemented with sufficient quantities of water helps to soften the stool and adds bulk to it allowing it to be more easily pushed through the intestine which prevents hemorrhoids. Eating refined and processed foods may also exacerbate the symptoms of hemorrhoids or lead to constipation which could lead to hemorrhoids. Hence foods such as chips, cakes, and candy should be avoided particularly among those close to or over the age of 50.

Getting enough exercise will also help prevent hemorrhoids and alleviate its symptoms. Someone over 50 who has no disability should engage in regular physical exercise not only to prevent hemorrhoids or alleviate its symptoms but also to remain healthy. It is also a good idea to not sit on the toilet for a long period of time as doing so can put a strain on the veins around the anus or rectum. Finally, gently cleaning the anus after a bowel movement prevents the area from becoming irritated and prevents hemorrhoids.

Even after taking many precautions, one can not be completely sure if they got rid of piles. Consult the best piles treatment doctors in Bangalore at SMILES today!