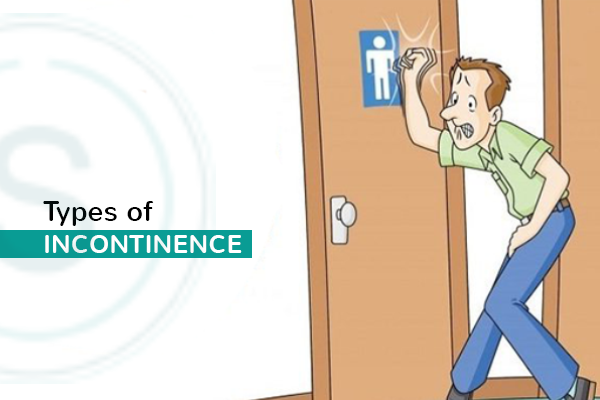 Many things can go wrong with the system that allows you to control urination or defecation is known as Incontinence. This incontinence is often an embarrassing problem, with urinary incontinence being more common.

Urinary incontinence refers to the leakage of urine (bladder leakage) when you actually do not want to. This condition arises when the control of the urinary sphincter becomes weak. The severity can range from leaking urine when you cough or sneeze to having an urge to urinate that’s so sudden.

Whereas, fecal incontinence orbowel incontinence is an inability to control bowel movements causing the patient to pass unexpected stools

People with urinary incontinence may experience unintentional loss of urine more frequently. Here are 6 different types of incontinence that include:

Urge incontinence occurs when you have an intense urge to urinate followed by an involuntary loss of urine. Here, the bladder contracts causing some urine to leak through the sphincter muscles holding the bladder closed. This urge incontinence can cause due to an infection or a neurological disorder.

Overflow incontinence is involuntary leakage of urine due to weak bladder muscles or due to a bladder that doesn’t empty completely. It can also occur when something blocks urine from flowing normally out of the bladder, as in the case of prostate enlargement which partially closes the urethra. The possible causes of overflow incontinence include bladder stones and conditions such as spinal cord injury, diabetes, and neurological damage.

Functional incontinence is a form of urinary incontinence in which a person usually aware of the need to urinate. But, due to some physical or mental impairments, they are unable to get to the bathroom. Here, the loss of urine can vary from small leakages to full emptying of the bladder. The causes of functional incontinence can include immobility, Alzheimer’s disease or head injury.

Reflex Incontinence occurs when the bladder muscle contracts and often leak urine(in large amounts) without any warning. Reflex (spastic bladder) incontinence can also happen when the bladder fills with urine and an involuntary reflex causes it to contract in an effort to empty the bladder. The most common cause of reflex incontinence is spinal cord injury above the T2 level.

Feeling uncomfortable discussing incontinence with your doctor? But, if incontinence is frequent and affecting your quality of life, it is important to seek medical advice. Consult the experts of incontinence at SMILES and prevent serious underlying conditions.