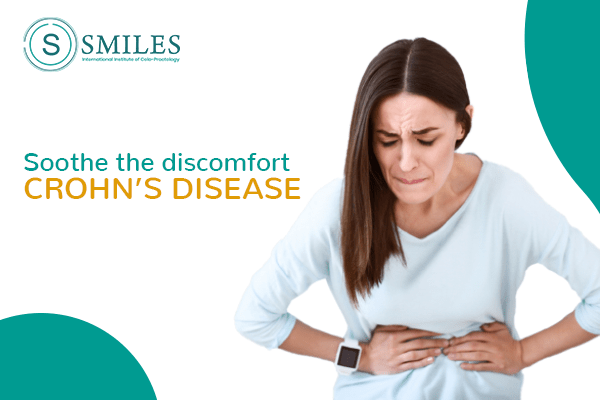 Are you suffering from excessive diarrhea, abdominal pain, and fever on a regular basis? You might have Crohn’s disease. A Crohn’s disease is a form of Inflammatory Bowel Disease (IBD) that causes inflammation to the lining of your digestive tract which can include infection and rarely a tumor in the colon. However, the right treatment at the right time gives you relief from Crohn’s flare and prevent damage to your colon.

No single treatment works for every patient with Crohn’s disease. The aim of the Crohn’s treatment is to reduce the inflammation in your intestines and prevent flare-ups of your Crohn’s symptoms, says the best gastroenterologists at SMILES.

But, do you know that you can treat Crohn’s disease naturally by making a few diets and lifestyle changes? Yes, if your Crohns disease is at initial stage  Dr. Prasad, the expert of gastroenterology in Bangalore suggests you some natural ways to heal your Crohn’s symptoms.

Ways to soothe the discomfort during Crohn’s disease

Here is a list of ways to minimize the pain and ease the discomfort during Crohn’s disease flare.

Probiotics are a healthy bacteria in the gut that are found in the food you consume or through supplements. These probiotics support your body’s immune system, improves digestion and certain studies have shown that probiotics help reduce the symptoms of Crohn’s disease. A good probiotic also enhances the supply of vitamin B12 as people with Crohn’s often suffer from vitamin B12 deficiency.

According to the research studies, omega 3 fatty acids, which are abundant in fish oils can help fight inflammation and reduce the chances of recurrence of Crohn’s disease. Many gastroenterologists suggest people consume fish oils, which contain omega 3 fatty acids as a treatment option for inflammatory bowel disease (IBD) and ulcerative colitis.

3. Cut back on fiber

Foods may not cause Crohn’s disease, but some foods can make your Crohns symptoms worse. High-fiber foods such as fruits, vegetables, and whole grains are not suggestible during Crohn’s flares. Stick to a low-fiber diet, try smooth and bland cooked cereals, and eat small meals frequently to improve your digestion and get rid of Crohn’s flare-ups.

People with Crohn’s disease are at increased risk of severe diarrhea says the experts of gastroenterology. Diarrhea that often comes along with Crohn’s flare can leave you dehydrated. So, drinking lots of water every day is crucial to stop diarrhea and avoid dehydration. Also, stop consuming carbonated beverages and alcohol as they increase bloating and gas.

We already know that smoking is bad for overall health. Did you know that smoking can increase the severity of Crohn’s disease?
People with Crohn’s who smoke find that they have severe symptoms and complications such as fistulas and strictures. Additionally, smokers tend to have more Crohn’s flare-ups and a decrease in the blood flow to the intestines than non-smokers.

Stress doesn’t actually cause Crohn’s disease but it can make the symptoms worse and may trigger flare-ups. Relaxation techniques like deep breathing or meditation might help you relax and give rest to your digestive tract. Make sure you get enough exercise and sleep to soothe your discomfort during Crohn’s flare.

Avoid taking non-steroidal anti-inflammatory drugs (NSAIDS) like aspirin and ibuprofen for pain and discomfort during Crohn’s disease. Because these drugs can irritate your stomach and small intestine which can increase the severity of your Crohn’s symptoms and make your disease worse as well.

Still neglecting your symptoms of Crohn’s disease? Stop it. Try the above natural remedies and lead a comfortable life.

Need more help regarding the treatment of Crohn’s flare-ups? Do not hesitate to seek help from our qualified doctors for Crohn’s disease at SMILES Bangalore.