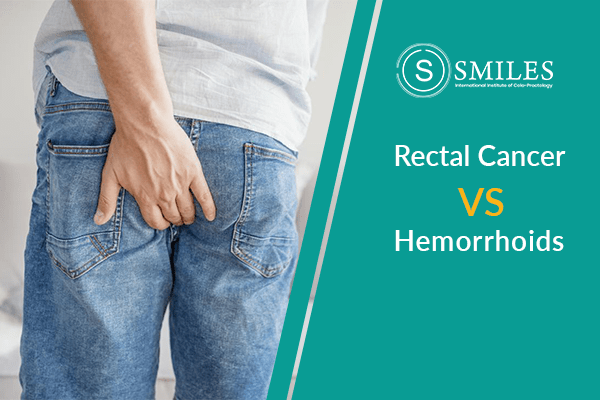 However, if you are experiencing increased bleeding from the rectum or pain in the rectal or abdominal area, no matter what your age, you should consult a doctor immediately says Dr. Parameshwara C M, the best colorectal surgeon.

Rectal bleeding (Bleeding from the rectum) is the most common sign or symptoms of both hemorrhoids and rectal cancer share. The other shared symptoms include blood mixed with stool, change in bowel habits, a frequent feeling of bowel movement, and discomfort or pain while passing stools.

According to the experts of coloproctology, rectal cancer (also termed as colorectal cancer) is a disease in which cancer cells form in the tissue of the rectum. Hemorrhoids, on the other hand, are blood vessels that have become swollen due to increased abdominal pressure and also due to constipation or diarrhea. Many hemorrhoids can be diagnosed during physical examination whereas rectal cancers are diagnosed by biopsy.

Any situation that increases abdominal pressure (for example, prolonged sitting and straining during bowel movements, low fiber diet, and pregnancy) is a risk factor for developing both internal and external hemorrhoids. In contrast, an increase in age, smoking, a family history of cancer and gastrointestinal diseases are the risk factors of developing rectal cancer.

Piles or Hemorrhoids are a common condition among adults that cause pain and discomfort if left untreated. Although hemorrhoids often go away in a couple of weeks, many of the treatment options involve easing the symptoms of hemorrhoids until they clear up on their own.

The top coloproctologists in Bangalore suggest that the pain and itching caused due to hemorrhoids can be treated easily at home by following the below methods.

Still, there is blood in the stool or the symptoms are persistent even after trying the above home remedies? Do not ignore it. It may be a sign of serious anorectal disorders to be considered. Consult the coloproctologists at SMILES Bengaluru for the better treatment of hemorrhoids and prevent colorectal cancers.