Home IBS IBS Triggers and Ways to Avoid them 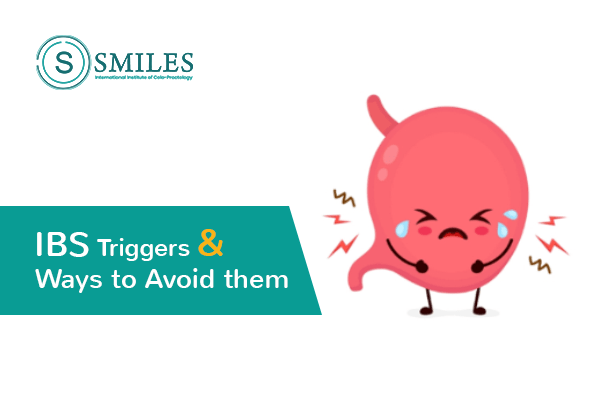 Are you diagnosed with IBS? Don’t panic.

IBS does not increase your risk of serious bowel conditions such as colon cancer or colitis. But, it can be well managed so it does not affect your overall health and quality of life says Dr. Prasad, the best gastroenterologist in Bangalore.

People with IBS have a sensitive digestive system and they notice certain foods seem to trigger IBS symptoms. Many IBS patients can manage their condition by making changes to their diet and lifestyle. But, knowing what foods to avoid and eat is most important if you have IBS symptoms.

However, research studies have shown that IBS can be triggered not only by diet but also by medications, and conditions such as stress or anxiety.

6 IBS triggers and how to avoid them

The experts of gastrointestinal disorders at SMILES Bangalore explains various IBS triggers and ways to avoid them.

Constipation is one of the most common symptoms associated with irritable bowel syndrome. In general, foods that tend to dehydrate can worsen the symptoms of constipation in people with IBS.

Here is a list of foods that make IBS constipation worse and should be avoided.

Irritable Bowel Syndrome that causes increased diarrhea is often called (IBS D). If you have IBS with Diarrhea, you have severe abdominal pain other IBS symptoms including frequent bowel movements.

Our experts in gastroenterology at SMILES outlined some foods that make IBS diarrhea worse and should be avoided.

3. Stress and Anxiety triggers for IBS

SMILES notify that stress and anxiety may not directly cause IBS symptoms but they make the symptoms more severe. Moreover, people with certain mental health issues such as depression and psychological abuse are more likely to develop IBS.

Avoiding the following activities that cause stress or anxiety may prevent IBS symptoms from occurring.

Does the menstrual cycle affect irritable bowel syndrome? Yes, because the hormonal fluctuations during the menstrual cycle may trigger increasing IBS symptoms and IBS worsens as hormones fall. Late in your cycle, you are more likely to feel bloated and constipated and even diarrhea.

Reduce IBS symptoms during your periods by doing the following:

5. Medications that can trigger IBS

Some drugs can trigger IBS symptoms resulting in the spastic colon, constipation, and diarrhea. Such drugs include antibiotics, tricyclic antidepressants, and the medicines containing sorbitol (such as cough syrup) that can worsen your symptoms of Irritable Bowel Syndrome.

Here is how you can avoid IBS symptoms caused by medications.

6. Other triggers for IBS

Our gastroenterology experts at SMILES explain that other triggers of IBS are variable and differ from person to person. However, some other common IBS triggers include:

Still suffering from Irritable Bowel symptoms? Why hesitating to consult a doctor? Visit SMILES and discuss all IBS treatment options available for IBS with constipation and IBS with diarrhea. Choose the best treatment that suits you and avoids further complications.