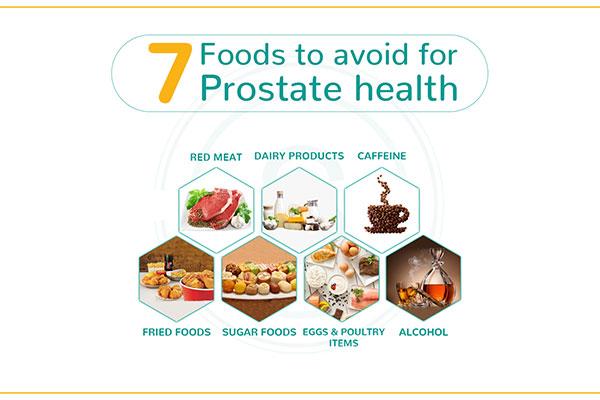 Prostate cancer is one of the most common types of cancers among men. However, dietary changes can be quite effective in managing the symptoms of prostate cancer. Want to protect your prostate? In addition to eating certain foods, there are some other foods that should be avoided for a healthy prostate. Dr Parameshwara, one of the best prostate cancer treatment doctors at SMILES lists foods to avoid if you are diagnosed with prostate cancer.

7 Foods to avoid for prostate health

Research studies suggest that the consumption of industrially produced red meats like beef, lamb, sausage, and pork has an increased risk of prostate cancer. This is due to heterocyclic amines (HCAs), carcinogens found in cooked meat.

Regular consumption of dairy products increases your risk of developing prostate cancer. This is because, many dairy foods from cows obtain biochemicals that lead to several cancers. Therefore, try low-fat or fat-free products such as cream, yogurt, and cheese that have no harmful biochemicals.

It may act as a diuretic which means that it increases the frequency of urgency to urinate. So, avoid caffeine products such as coffee, tea, soda, and chocolate to improve your symptoms of Benign Prostate Enlargement (BPH).

Potential dietary carcinogens form in foods when cooked using frying or grilling. Studies also reveal that frequent consumption of fried foods such as fried chicken and doughnuts is associated with an increased risk of cancer, including prostate cancer.

Refined sugar is another thing that must be avoided for those with prostate problems as it can increase inflammation. Experts also say that it may increase risk of occurring several types of cancers such as pancreatic, colorectal cancer, especially prostate cancer may be most influenced by refined sugar.

Recent studies found that eating eggs and poultry increases the risk of BPH symptoms. It may be due to the presence of high levels of arachidonic acid in the egg yolks that increases inflammation in theprostate gland.

If you have an enlarged prostate, it is recommended to avoid drinking alcohol. As Alcohol is inflammatory, it exacerbates the inflammation present in the prostate gland. It can also cause the muscles in the urinary tract to relax, which could result in the need to urinate more frequently that leads to prostate problems.

Along with an increased risk of prostate problems, the foods mentioned above are also associated with thyroid problems, reproductive issues, and even heart diseases in men.