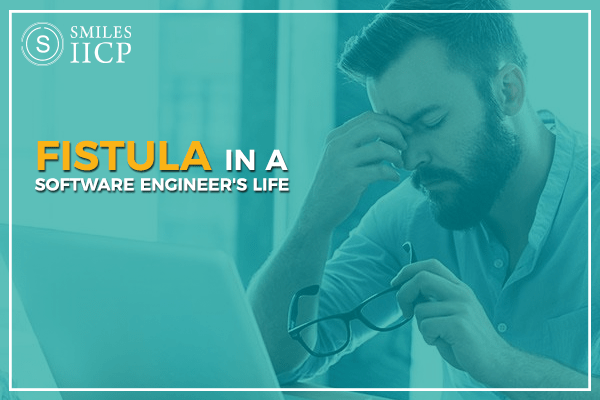 Hi everyone,
Myself Rahul working as a Project engineer in one of the top multi national company in Bangalore. Being a software engineer, all of my work involves prolonged sitting with almost 13 hours per day in the office. The only breaks I took were lunch and two bathroom breaks. I have always been regarded as the sincere and valuable resource to my team because of hard work. But lately, I have realized how this lifestyle affected my health and happiness to an extent I couldn’t imagine. Let me share my personal experience of suffering from complex fistula which became very difficult to stay with.

As I told earlier, I used to spend a minimum of 13 hours sitting in office with almost no breaks. In Dec 2017, I started noticing some discomfort in the rectum area but I ignored it thinking it was just some indigestion or constipation.

But later in one month, it got severe and I started noticing a pimple like a bump and an abscess coming from inside the rectum. And I was in extreme pain while sitting and any action which requires sphincter muscles.

Even after a touchable pimple and a severe pain, I ignored it. After suffering for more than 45 days, I started draining some liquid from my anus. The situation has completely debilitated me. I couldn’t sit for long and focus on work. I could see the decline in my performance. And so I decided to check with a doctor as I couldn’t sit and work at the office.

Later, I got to know that fistula is not a call of a gastroenterologist because he is also just a physician and fistulas should be treated by a colorectal surgeon.

I have been searching for a best colorectal surgeon, then a friend of mine suggested Dr. Parameshwara C M, a best colorectal surgeon at SIMILES. Finally, I visited SIICP, the doctor told me about the complications with quackery. And, he explained me clearly about LIFT (Ligation of Intersphincteric Fistula Tract) procedure and seton insertion to treat complex fistulas. Then I understand a seton is mandatory since the abscess needs to be open to be able to leak out. And seton is a good thing because it allows the fistula to stay open and keep draining.

The doctor recommended me LIFT surgery. So, I had the seton put into the fistula tract for a couple of months. Believe me, the entire Seton process was very comfortable and painless. However, after coming home I did have the rubbing pain with the seton. As suggested by the doctor, I used to do sitz baths to clean up after every bowel movement. I had pus coming out and had to change dressing 3-4 times a day.

In my follow up after two months, the doctor said I was ready for the LIFT surgery. Soon I was taken to the surgery room and got operated, then the doctor decided to do a fistulotomy instead of LIFT. He later told me that Seton helped the fistula to be very external and fistulotomy was sufficient for me to keep safe of any incontinence. The doctor did mention of having to take time off work and  managing diet after fistula surgery etc.

Within a week of fistula surgery, I noticed that my pain has been started reducing. After the initial postoperative pain was gone, I immediately felt the difference, walking and sitting became much easier. Also, I haven’t had an abscess since the day of the surgery. The fistula was healing well and almost 0% discomfort and the discharge has altogether gone.

The whole recovery took 2 months to get over. I felt lucky to get the best coloproctologist in Bangalore and also a speedy recovery.

I am so thankful for the whole team of SMILES for keeping me rejuvenated and providing me the best treatment for fistula.

I am very happy to say I am now fistula free and enjoying my job and personal life!!! Hurrah!!!