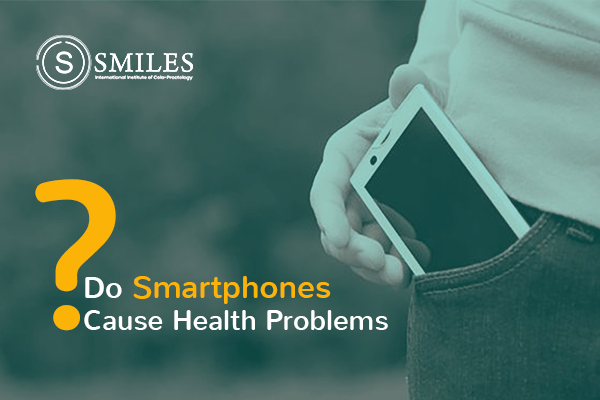 Want to get healthy? Start by putting your smartphones down.

Smartphones are nowadays have become an essential part of modern telecommunications in every individual life. Because mobile phone use is so widespread, medical researchers are concerned that any health risks associated with mobile phones could cause significant health issues.

In fact, mobile phones emit radiofrequency (RF) energy, a form of electromagnetic radiation, which can be absorbed by antennas close to the phone. There are concerns that the radiation emitted by mobile phones could cause health problems such as headaches or brain tumors. However, the International Agency for Research on Cancer (IARC) also states that cell phone radiation is possibly carcinogenic, which means that there could be a risk of cancers.

In addition to the potential physical risks, it has been argued that smartphones cause emotional, social, and psychological risks as well.

SMILES suggests that it is important to understand the risks with mobile phone usage and find how to use them to limit radiofrequency exposure.

What are the health risks associated with smartphones?

The number of hours you spent using cell phones is not just annoying, but also highly dangerous. As you become increasingly reliant on smartphones like picking them up every minute to check the latest notifications, you are more susceptible to smartphone health hazards.

Here is how smartphones cause harm to your physical, mental and emotional health.

Looking down at your phone screen while texting and browsing can put pressure on the neck and spine which can cause headaches and neck pain, called tech neck. This condition can even lead to nerve pain that radiates to the back and shoulders.

Take a break every 20 minutes when using a smartphone. Maintain a good posture and do not hunch your shoulders forward. You should hold your phone higher when you are using it.

The technology revolution has led to reduced physical activity and the development of obesity, which is one of the biggest causes of death. Inactivity that leads to obesity is also at greater risk of cardiovascular disease and cancers including breast cancer, prostate cancer or bowel cancer has been greatly increased.

Take a walk or just stand up for every 15 minutes when texting or browsing on your smartphone. If someone is working on the floor above you at work, go and talk to them rather than sending a message or an email.

3. Damage to the eyesight

Using a smartphone with a bright screen? A new study says that small text and bright screens may ruin your eyesight. The exposure to blue light, the glow emitted from most of the smartphones, tablets, laptops and other handheld devices promotes the growth of poisonous molecules in your eyes.

When watching a smartphone, give your eyes a break, minimize glare, adjust the brightness. Keep a clear screen and hold the phone farther away to prevent your eyes from the damage.

More than 70 percent of smartphone users take their phones to bed. But, studies have concluded that just two hours of exposure to screens can lead to sleeping troubles. It is also said that late-night intellectual stimulation from cell phones makes it more difficult to relax.

Listen to a podcast instead of watching a video, use an internet blocker, use night mode or put your phone out of reach to reduce your smartphone screen at night.

Digital multitasking may seem successful, but it may be making you less focused in the long run. Researchers also found that the presence of smartphones is distracting and greatly reduce your attention spans and make you less effective at completing complex tasks.

You can increase your mental concentration through exercise and meditation. Put your mobile away from you and increase the strength of your focus gradually.

6. Change in the structure of your brain

World Health Organization (WHO) classifies that prolonged mobile usage can even change the physical structure of your brain. People who engage in long term media multitasking actually have a grey matter density in the cortex portion of the brain. This can be linked to decreased cognitive control and socio-emotional regulation.

To improve your brain power, turn off the internet or stop using social media before you start working on any difficult tasks, build your will power and practice mindfulness throughout the day.

Cell phones (including smartphones) emit a form of energy known as radiofrequency (RF) energy, so some concerns have been raised about the safety of mobile phone usage. That’s why there have been many studies focuses on whether cell phones might increase the risk of malignant (cancerous) or benign brain tumors.

To reduce the risk of brain tumors or brain cancer, use a speakerphone feature, switch to a wired headset or try a Bluetooth wireless headset. Instead of putting the phone close to the ear hold the phone an inch from the ear.

According to the recent study, cell phones use exceeding 60 minutes per day could result in damage such as high-frequency hearing loss. Using the cell phone while it is connected to the charger can even increase the radiation from cell phones and may cause hearing damage.

To protect yourself from hearing loss, block the noise (wear earplugs), avoid too much sound or turn down the volume.