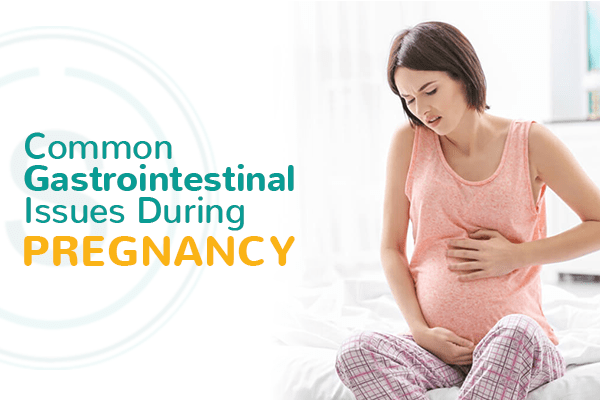 Are you experiencing Gastrointestinal issues?

Some women may experience GI disorders that develop after becoming pregnant. Others have chronic gastrointestinal diseases prior to pregnancy that requires special consideration during pregnancy. Understanding the prevalence of various GI issues during pregnancy is necessary to optimize care.

Therefore, SMILES, in this article focuses on the most common symptoms of GI disorders during pregnancy, its causes, and the ways to manage them.

What are the symptoms of Gastrointestinal issues during pregnancy?

Because there is a wide range of gastrointestinal disorders, the symptoms may vary. Some of them include:

In fact, nausea is one of the earliest symptoms of pregnancy in the first semester that can often be accompanied by vomiting. In rare cases, it is referred to as morning sickness, however, it can become severe and require immediate treatment to manage.

Diarrhoea is a common condition during pregnancy that causes loose or watery stools caused by viruses or bacteria. This can also be caused by certain medications. While diarrhoea is common and generally not serious, the patient should consult a doctor if experiencing blood of mucus in stool.

Constipation is having an infrequent bowel movement or having hard to pass bowel movements. It is generally described as having fewer than three bowel movements a week. The pressure from the enlarging uterus on the rectum and lower part of the intestines may cause constipation.

Heartburn affects many pregnant women due to increased progesterone, the hormone that relaxes muscles, also relaxes the stomach valve that keeps acid out of the esophagus. Moreover, the growing uterus crowds the stomach, forcing acid into the esophagus.

Bloating, a build-up of gas in the stomach and intestines may occur during early pregnancy. This is due to the excess gas production and hormonal changes that occur during pregnancy, which slows down the digestive system. Bloating can cause pain, discomfort, and a stuffed feeling in the upper abdomen.

A gallstone is a collection of extra cholesterol and bile acids that form a stone in the gallbladder. Pregnant women are at increased risk of gallstones due to the increased estrogen levels – says Dr. Parameshwara, one of the best gastroenterologists in Bangalore. Gallstones, if left untreated can cause the gallbladder to become infected.

What causes GI issues during pregnancy?

How GI disorders during pregnancy be treated?

Gastrointestinal diseases are very common during pregnancy, but they do not cause serious health complications. Most gastrointestinal infections caused by virus or bacteria normally resolves in a few days.

The experts of gastroenterology at SMILES recommend some home remedies that help manage GI issues.

Increase the amount of fiber in your diet. Avoid sugary foods and processed foods. Limit caffeine and dairy products in your daily intake.

Certain GI issues can cause dehydration and so increase the amount of fluids you take in, including water and juices. It helps improves digestion and keeps your GI tract moving regularly.

Regular exercise boosts blood circulation to the internal organs which help bowels to move smoothly. So, aim for at least 30 minutes of moderate exercise a day. Speak to your doctor and find the best workouts that are safe during pregnancy.

If your symptoms of GI diseases are persistent and unmanageable, you may be recommended medications which include antacids, digestive enzymes, antidiarrheals, and GI stimulants, etc.

When to see a doctor?

You should consult with your gastrointestinal specialist and seek immediate medical care if you have any of the following digestive symptoms.

Schedule an appointment with our top gastroenterologists at SMILES.