Home Digestive Diseases 9 Top Reasons for Pain in your Pelvis 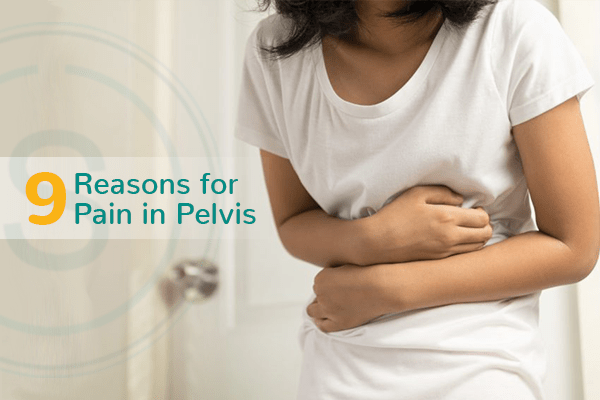 Having pain in the area below your belly button & above your legs?

This is known as Pelvic pain. The pain in the pelvic area can develop from conditions affecting a variety of organs that include your bowel, bladder, uterus, ovaries and more.

There are many misconceptions about pelvic pain in women that it might be a menstrual pain and, persistent pelvic pain, also known as chronic pelvic pain can be caused due to the muscle strain on the pelvic floor.

It is important to know the common causes of pelvic pain to learn what’s normal and what’s not, and when you should seek medical help explained by the best gastroenterologists at SMILES.

9 Top Reasons for Pain in your Pelvis

The following are some of the conditions that can cause or contribute to persistent pelvic pain.

Endometriosis is a condition that affects a woman’s reproductive organs and is commonly associated with pain in the pelvis.

It occurs when tissues that normally grow inside the uterus (the endometrium) grow in other parts of the body – typically in the pelvic area such as bowel, bladder, or ovaries. Women with endometriosis experience mild to severe pain that occurs before or during their periods.

Often referred to as a similar condition of Endometriosis, adenomyosis also involves a problematic cell growth in the muscular wall of the uterus. It can cause menstrual cramps, lower abdominal pressure, and bloating before periods and can result in abnormal or heavy menstrual bleeding.

Irritable Bowel Syndrome (IBS) is a digestive disorder that causes pain, constipation, bloating or diarrhoea. The exact cause of IBS is not clear but it can be due to the muscle wall of the bowel becoming sensitive and contracts unevenly. In some people, stress and certain foods can trigger the symptoms of IBS.

Pelvic floor dysfunction or disorder is an inability to correctly tighten and relax pelvic floor muscles to have a bowel movement. Pelvic floor disorder can cause functional problems such as uncontrolled loss of urine (urinary Incontinence) and faecal incontinence.

With pelvic floor disorders, pain in the pelvis may also be caused due to the increased pressure in the pelvic region.

An adhesion is a scar tissue that may cause in internal organs of the body to stick to one another. They may affect any of the organs in or near the pelvic region including uterus and ovaries.

The scar tissue can form due to severe infections, endometriosis, or pelvic inflammatory diseases. Pelvic adhesions can cause chronic pelvic pain that prevents normal bowel movements.

Ovarian Cysts occur when the ovary (an organ in the female reproductive system) fails to release an egg or ovum.

When this happens, a cyst forms in the area that causes bloating, pressure or pelvic pain. But, most cysts are noncancerous that goes away on their own while some cysts may burst and bleed that cause severe pain in the pelvic area.

Uterine Fibroids are benign tumours that originate within the walls of the uterus (womb). Although they are composed of the same muscle and fibrous tissue, they are much denser than the normal uterine wall.

These uterine fibroids can cause irregular or painful periods including pain or discomfort in the pelvis and the lower back.

Affecting more than 50% of women during their lifetime, another common cause of pelvic pain is Urinary tract infection.

UTI is an inflammation in the bladder due to bacterial infection that causes pain in the pelvic area, a burning sensation and a lower abdominal pain when passing urine. Although UTIs are common, if left untreated they can develop chronic kidney infections.

An inguinal hernia occurs when tissue protrudes through a weak spot in the abdominal muscles. These inguinal hernias may cause pelvic pain which is also associated with groin pain in both men and women.

This type of hernia is not necessarily dangerous, however, they can also lead to life-threatening complications.

When to see a doctor?

For many causes of pelvic pain, it is not required to seek medical help. But, there are some cases listed below that you should consider visiting a qualified gastroenterologist immediately.